This isn't some kind of metaphor. Goddamn, this is real


Here are some thoughts on the recent work of Kelley O’Brien; they were published elsewhere but I'm happy to post them now as they raise some points I’ve been thinking about regarding metaphors, axis and what Hugh Campbell refers to as "locative systems" that I hope to unpack further.
You can find examples of her work here: cargocollective.com/kelleyobrien

“What we are concerned with here is not texts but texture. We already know that a texture is made up of a usually rather large space covered by networks or webs; monuments constitute the strong points, nexuses or anchors of such webs. The actions of social practice are expressible but not explicable through discourse: they are, precisely, acted – and not read.”
Henri Lefebvre, ‘The Production of Space’

On certain winter days, when it’s cold and wet enough, the walkway outside the library and museum at Cranbrook Academy of Art steams. Quite literally. The Knoll Walkway, named after designer and Cranbrook alumni Florence Knoll, is so well heated you could walk on it barefoot even when it’s 20 below (I know; I tried). 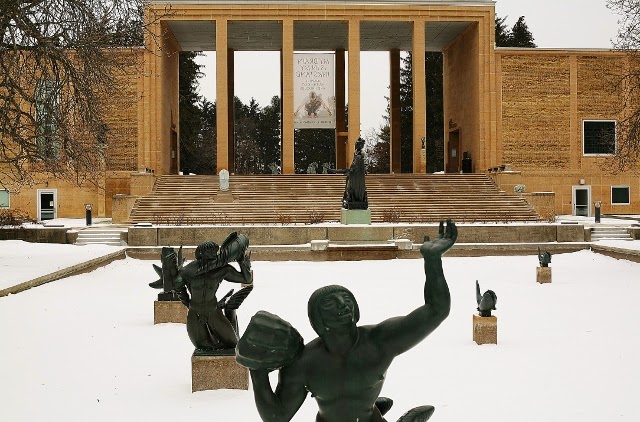 A short walk away is Woodward Avenue, the near 22 mile highway that runs from Detroit in the south to Pontiac in the north-west. It was the first road in the USA to be concreted when a mile was completed in 1909. It begins in Wayne County and ends in Oakland County where Cranbrook is situated. On the way it passes numerous sites of historical importance including the Detroit Institute of Arts and Henry Ford’s factory built in 1910 where the Model T was first produced and the assembly line system was invented. Both cities at either end of the highway - Detroit and Pontiac – are bankrupt and currently under emergency administration.

Two thoroughfares, two situations, two axes. It’s tempting to read both as metaphors. This means to ascribe to them the status of the symbolic or the poetic; to bring them within the systems of art. On the one hand the steam at Cranbrook speaks to both the energy that fizzes from the members and guests of its very special community and the (perhaps obscene) power that cultural and financial capital can mobilize. On the other Woodward Avenue can serve as a convenient image for the history of 20th Century America. Whilst once at the heart of the Fordist model of industrial, automotive might, Woodward Avenue now joins two ailing, derelict, post-urban sites that have lost their previous functions and identities.

But these are not mere metaphors. They are hard, concrete realities. And this, I think, is what Kelley O’Brien’s work is about. It seems motivated by a fierce, stubborn refusal to allow the work that she does to become subordinated to hegemonic hierarchies of metaphor.

Yet, with O’Brien’s refusal comes a double risk. A sweet gamble perhaps, but a tricky one nonetheless.

The first risk is that tiresome, un-answerable question will rear its head once more: “but is it art?”  As if that bureaucratic clarification had any heft right now.

One, seductive, way of thinking about art is through the inherited legacy of Modernist rhetoric of defining art as a means of escape from the messy exigencies of reality. In its most decadent form this means thinking like Matisse who said:

“What I dream of is an art of balance, of purity and serenity, devoid of troubling or depressing subject matter, an art which could be for every mental worker, for the businessman as well as the man of letters, for example, a soothing, calming influence on the mind, something like a good armchair which provides relaxation from physical fatigue.”[1]

This, seductive, way of thinking about art is also a way of thinking about art schools too. This approach conceives of art schools as zones of relative autonomy detached from their environments. Such autonomy requires preserving places like Cranbrook as those where aesthetic practices can be abstracted and protected from the outside world. A place of privilege and luxury perhaps. A place of good armchairs. Yet, thankfully, this autonomy can take a dialectical form. The armchairs can be refused (or at the very least made uncomfortable).

For, the luxury and privilege of autonomy can also create a space where experiments may take place without any guarantee of success; a place where values can be questioned and tested even if it’s not known where this questioning will lead. Adorno opens Aesthetic Theory in the spirit of such doubt: “It is self-evident that nothing concerning art is self-evident anymore, not its inner life, not its relation to the world, not even its right to exist”[2] he writes. This lack of self-evidence has consequences not only for art but for art schools too. It calls their activity into doubt. Yet it’s precisely this uncertainty that is important. Art and its schools provide spaces where questions can be asked that either might not be asked otherwise or that probably don’t have answers.

The lack of answers is the second risk that O’Brien has committed to. The risk comes from embracing this lack of self-evidence so wholeheartedly that it becomes necessary to leave both sites of art and the academy. O’Brien’s refusal to design armchairs - even though she’s in one of best-known places for furniture design there is - is not a symbolic gesture. Instead it’s a discomforting, embodied choice. Her move from the safe studio spaces of Cranbrook to Pontiac exemplifies the hazard she’s taken on which – let’s be clear – risks failure that is actual, not metaphorical.

A path may or may not be a metaphor, but it can form an axis too. And things can turn around an axis and become aligned. In their collaborative meditation on architecture, Chambers for a Memory Palace Charles Moore and Donlyn Lyndon discuss how Saarinen created an axis at Cranbrook in the “broad artful passage” that leads from the gates past the reflecting pool to the steps up to the museum and library. This axis, by the way, bisects the steamy Knoll Walkway. The effect created is that: “an observer moving through these spaces is almost always aligned with something: an arch, a gate, an entry, a playing field.”[3] The effect is the creation of a space of deliberation and of action where the participant is positioned between the library to their left and the museum to their right and can choose. Obviously, this is not a simple spatial choice. This axis is, Lyndon observes, not neutral, it is: “a relationship across space, not simply a path.”[4] Both the Knoll Walkway and Woodward Avenue are also not simply paths. They are also situated within a system of alignments that are geographical, historical, economic and political. But they are not, I’m arguing here, reducible to mere metaphors either. This is because axes are inherently relational. Axes create relationships in space and time, between things and people. Lyndon continues that:

“[Axes are] an extension of being face to face; when you want to be certain to give your full attention to someone, or to signal that you are doing so, you position yourself opposite them, your bodies roughly aligned, your eyes attending to theirs.”[5]

With sign-posts, lights, paint and whatever material she might have to hand O’Brien makes new axes, besides streets, along rivers, between people. With each new axis new relationships are brought into being. What she shows is that our relationships have an architecture. This is a concrete architecture. It will always exceed whatever clumsy metaphors we design around it.