Some thoughts on rocks and glass

“The rock is the gray particular of man’s life,
The stone from which he rises, up -- and -- ho,
The step to the bleaker depths of his descents ...

The rock is the stern particular of the air,
The mirror of the planets, one by one,
But through man's eye, their silent rhapsodist,”
Wallace Stevens, [from] Night’s Hymn of the Rock 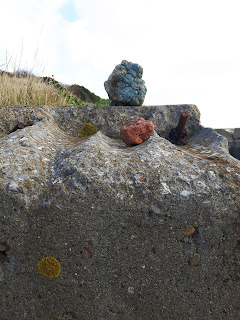 In a little book, Seven Clues to the Origin of Life, which is as amusing and entertaining as it is audacious and astonishing Graham Cairns-Smith uses the form of a detective story to present his claim that life begins with clay. But rather than a mystical or religious account of how we’ve been fashioned from the earth he offers a modern origin myth based in chemistry and biology. His argument is that the foundations for organic forms of life lie in the reproduction of the inorganic structures of minerals. Crystals, in particular, replicate their structures in a way that offers a clue to how living things might also reproduce and survive. So, the miniature crystals that squirmed within primordial clay were not merely inert, dumb stuff but instead vital, unconscious actors in the still evolving story of life, humans and whatever is coming next. As he puts it: “We have, as it were, identified the organisation responsible for that ‘crime against common-sense’, the origin of life. And it is true that the proposition that our ultimate ancestors were mineral crystals was not widely anticipated.”

This argument is audacious because it is essentially claiming that genetic inheritance is not unique to living organisms but is rather a process that might be shared between all sorts of different materials some of which are often considered to be alive (organisms) and those that are not (minerals.) As Cairns-Smith puts it: “Clay crystals growing [within a piece of sandstone]… have, often, distinctive and elaborate forms - such as the grooved kaolinite vermiforms that were evolving by direct action… and it is not too difficult to imagine circumstances in which simply the shapes and sizes of crystals could have a bearing on their ability to grow quickly, or break up in the right way, or stay in the right place, or survive difficult conditions- or otherwise be a success… just the same as the way in which the parts of plants and animals become optimised through natural selection. The practical difference here between crystal genes and, say, trees or giraffes would be that for crystal genes shapes and sizes are so much more directly specified by the genetic information.”

And it is astonishing because it gives a tentative answer to one of the knottiest problems that scientists and philosophers (along with all the other story-tellers) have spent the history of humanity trying to answer. That is, how is life on earth even possible; what is it; and when did it begin? These questions, of course, come interlaced with what philosophers call “the hard problem of consciousness” whose down-beat name somewhat understates the magnitude and gravity of the problem in question and makes it sound like a tricky weekend crossword puzzle. The question at stake requires the perhaps impossible task of describing and explaining the nature of conscious experience.

Cairns-Smith’s claims have had a mixed reception over the past few decades in part because of the endemic difficulties in working in the gaps between different scientific disciplines (in this case biology and chemistry.) It is also extremely difficult to observe the micro-movements of clay and establish whether it really is self-organising in a way that means it could be considered proto-biological.

However, it is the ambition and challenge of his theory that is more important than any of its specific claims and it’s what I’m interested in here. The aspiration is to explain how the material substrate of the world can give rise to things that can live and reproduce; that is, to explain how stuff can do stuff. It is a way thinking about how disinterested the material world is in the humans that skate about on its surface. It still operates according to its own occult operations. But it also reminds us of the perhaps horrific and monstrous thought that lying buried at the core of all our humanity there is something inhuman, inorganic, indifferent over which we have no control.

The reason that this would be important is because nested within metaphors for describing the relationships of humans with objects are metaphors for thinking about what those humans are. Or to put this another way: a way of thinking about things is also a way of thinking about ourselves.
For example, it is becoming increasingly obvious that in contemporary life objects and people are losing their autonomy. Everything now is seemingly interconnected in networks of communication and control. In what Manuel Castells calls The Network Society which began to appear in the last 3rd of the 20th Century the prevalence of systems of telecommunication, computing, transport, and so on mean that humanity is connected across the globe at burgeoning speed. Think about the Internet of Things in which devices communicate with one another and are controlled over networks. Given this it’s easy to believe that just as objects are not autonomous so too we humans are also losing our independence. We are also being subsumed by new technologies, social media and countless other things that we only barely understand but which make almost infinite demands on our attention.
But maybe thinking not only about but also through materials like clay, or glass, gives us another way of thinking about both objects and ourselves. Glass, for instance, might remind us of a world now lived through interfaces and windows; through the pads and screens we constantly interact with. It resonates with a life lived through surface and touch where we swipe right. Or left.

But glass is also a material with its own qualities and its own private secrets. Glass is not the same as clay. Rather than comprised of mineral crystals in fluid,  glass is a super-cooled liquid that is in the constant flux of flow and formation. Through these processes it exhibits its own material and alien agency. Beneath its surfaces small universes roil away at their own glacial pace. In it we might find a way of thinking, once again, about who we are. In its awkward autonomy we might rediscover what it means to be human in these dark, dark times.