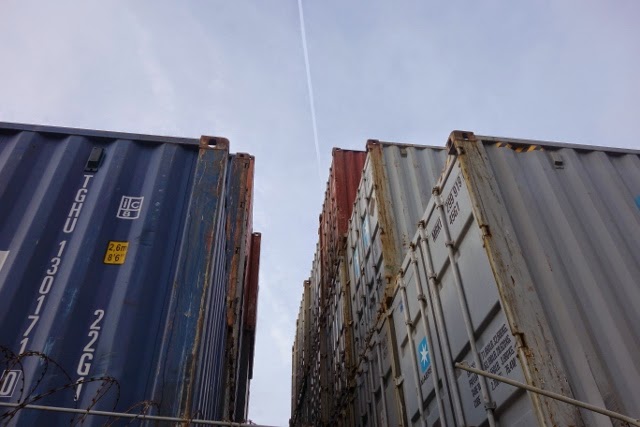 The container ships that frequently dock in Dublin Port are representative of the biggest moving objects that humans have ever produced. Yet despite the almost sublime mass of these ships in general they are but tiny elements in much bigger systems. They provide the necessary physical connections in the virtual networks of global communication and control. Without these ships the world system would stutter and atrophy. Without the objects they transport modern environments and lifestyles would be untenable. As Rose George puts it “nearly everything” comes to us by sea:


“Sometimes on trains I play a numbers game. A woman listening to headphones: 8. A man reading a book: 15. The child in the stroller: a least 4 including the stroller. The game is to reckon how many of our clothes and possessions and food products have been transported by ship. The beads around the woman’s neck; the man’s i-phone and Japanese-made headphones. Her Sri Lanka-made skirt and blouse; his printed in China book. I can always go wider, deeper and in any direction. The fabric of the seats. The rolling stock. The fuel powering the train. The conductor’s uniform; the coffee in my cup; the fruit in my bag. Definitely the fruit, so frequently shipped in refrigerated containers that it has been given its own temperature. Two degrees Celsius is ‘chill’ but 13 degrees is ‘banana.’” [Ninety Percent of Everything, (Picador, 2013)]
There are two often repeated commonplaces about the conditions of contemporary capitalism: its virtuality and its speed. This is understandable. In general the move to a post-Fordist economy is explicable as the shift from manufacturing to information; that is, from infrastructural to informational systems. Now a lot of communication takes place in spaces that are de-materialized; online. Interactions are often performed rapidly in which vast global spaces are collapsed with either a swipe/click or another plane journey. It’s easy, therefore, to assume that the two icons of the world system are the tokens of this virtuality and speed: the screen and the jet-plane. Yet just below the surfaces of the swiftly digitised world a lumbering mechanism of docks, cranes, containers and vessels grinds and shudders.


The modern container was invented in 1956 and adopted in the subsequent decade. It standardised shipping according to a module that could be easily transferred between ships, trains and trucks. Before then it didn’t make sense to manufacture things in other places to avail of cheaper resources and labour. Containers rendered everything transferable in a global system: raw-materials; products; people. The container ship made capital truly migratory on a global scale. But these massive ships are weighty, cumbersome and slow. The immediacy and speed of day-to-day living is only guaranteed by the irresistible inertia by which these ships move. The container ship is, in short, both the necessary mechanism and emblem of post war capitalism. That which lies manifest within their manifest is the very apparatus of our lives.


Marx predicted that in the stage of capitalism brought about by the Industrial Revolution all that is solid would melt into air. Relations that were concrete and human, he feared, were being effaced by the immateriality of economic ones. But, it transpired, all that is solid didn’t melt after all but was instead broken down to its component parts, boxed up and shipped out in container ships. These behemoths criss-cross the planet drawing their own occult patterns. The intricate traces they leave in the foam of the sea only hint at the mostly hidden migration of capital in the global system.
[This was the beginning of a longer response to Cliona Harmey's Dublin Ships project]
Posted by Francis Halsall at 09:05 No comments: