[Text from a spoken introduction to the first of a two part programme curated by Aoife Desmond at Irish Film Institute organised by the Experimental Film Club. Ruins and Entropy Part I shows Robert Smithson's Spiral Jetty 1970 and Mono Lake 1968-2004 ( made with his partner Nancy Holt).]

The first time I saw Robert Smithson’s Spiral Jetty was in a lecture theatre at Glasgow University where I was studying history of art. It was a faded slide of the famous photograph of the work taken by Gianfranco Giorgoni in 1970, the year the earthwork was completed. 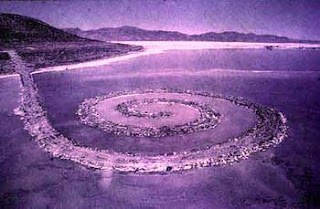 Old analogue photographic slides on transparency have a tendency to become pinker as they get older. I have a theory that  progressive viewings by bored students in darkened rooms slowly leeches them of their colour and life. That each slide has a limited amount of views that it can yield, and it will degrade with each gaze directed at it. In the case of the slide of Spiral Jetty it was particularly faded, and indistinct. And especially pink.

This seems appropriate for two reasons.

Firstly, the pinkness – the salt lake itself, at Rozel Point, beyond the Golden Spike monument, in Utah is bright pink. In part this is why Smithson chose this place for his piece having aborted attempts to work at sites in Bolivia and Mono-Lake, California. As the slide was becoming pinker it edged toward the conditions of the landscape it pictured and began to mimic.

Second, it’s also appropriate for the photographic slide to be faded because it points to something of the object Spiral Jetty in general – that is that it alludes perception and resists representation.

I witnessed this allusiveness first hand in 2001 when I visited the piece as a PhD student to find that it had, again, gone beneath the water. 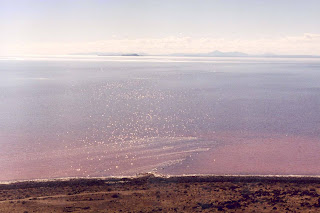 My own art safari to the site revealed further dimensions to the work. It stank, for example. A sulphurous fug hung about the landscape. It’s also, despite what is often claimed for it, not monumental. In actuality the 1500ft coil is somewhat quaint. Spiral Jetty is somewhat dwarfed by the industrial causeway one first encounters that was built as part of an aborted attempt to run an oil extraction business there. We spent some time walking up and down this before realizing that we weren’t on the Spiral Jetty. 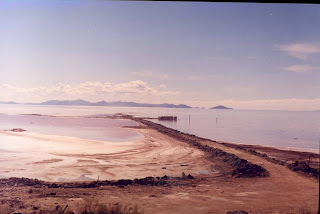 All of which suggests that the film of Spiral Jetty which we are about to watch is an equally deficient form of representation. And in part it is a deficient form.

But this is, of course, part of the point. The film is just part of a complex system of cross references which include an earthwork in Utah, a film and an essay.

Craig Owens likens this conceptual structure of self-reference to a spiral.
“The Jetty is not a discreet work, but one link in a chain of signifiers which summon and refer to one another in a dizzying spiral. For where else does the Jetty exist except in the film which Smithson made, the narrative he published, the photographs which accompany that narrative, and the various maps, diagrams, drawings, etc. , he made about it?”

The film and the essay have comparable structures. They weave together at least three key themes:
(i)  A documentary account of the creation of the work
(ii) An, at times, hallucinatory account of how Spiral Jetty is an allegory for Smithson’s ideas of time and space and entropy
(iii) A self-reflexive meditation on the relationships between the different media of the work (sculpture, film and written word.)

It thus emerges that there is no single, unchanging thing that we might call Spiral Jetty. There is no discrete art item; and no singular work of art. Instead, it transpires that the Spiral Jetty, has an unstable identity that is manifested across and between a variety of media.

The essay itself spirals around itself with repetitions and false starts bringing the reader back around upon themselves.  And it too begins to disintegrate into something formless – just as the earthwork frequently disappears.

Thus, the physicality of language – elsewhere Smithson talks about Strata in language, and heaps of words – relishing its brute physicality - means that whilst it may be mapped directly onto a landscape, it can never full represent it. Just like the photographs and the film.

This, then, is the point at which nature re-enters Smithson’s work.

This seems, at first glance, odd, to talk of nature in relation to an artist who uses broken glass, mirrors, collapsed wood-sheds, glue and asphalt in his work. In one sense his work is anti-environmental.

But, by nature I don’t mean that fluffy nature of moss and dew, but something far more threatening. The nature of entropy.

All of Smithsons work is concerned with entropy.

One of his famous examples is the sandpit from A Tour of the Monuments of Passaic, New Jersey. Smithson imagines a child’s sandpit split in half with black sand on one side and white on the other. When a child runs clockwise in the pit the sand turns grey, but if they run anti clockwise the sand doesn’t revert back to black and white. It becomes ever greyer.

Like the sandpit Smithson’s work is in collapse. But collapsing not only materially; it collapses theoretically too.

Spiral Jetty is not represented by any of its different iterations. It is rather a complex object comprised of those iterations.

It is the sculpture, the essay, the film, the photographs, the drawings, the conversations, the arguments.

His work is also in a process of collapsing in on itself, of moving towards entropy. In the Spiral Jetty essay, Smithson writes: ‘No ideas, no concepts, no systems, no structures, no abstractions could hold themselves together in the actuality of that evidence.’

Smithson writes and makes films not to valorise literature and film-making; but to bear witness to their failures. He claims that language ‘covers’ rather than ‘discovers’ its situations. Its dumb materiality, the thud of its words and the rustle of its language will always bring into view the gap between words and the world.

Language, like other forms of representation, such as cinema, and faded slides in art history departments
must always fail;
must always break down.
And fade to Pink.

Posted by Francis Halsall at 05:08